Created by two illustrious names in French perfumery, Christophe Raynaud and Amandine Clerc Marie, La Nuit Trésor Eau de Parfum is a captivating elixir constructed around a hypnotic black Rose given a discreet erotic twist by vanilla Orchid, the iconic fragrance of women in love. With La Nuit Trésor L’Eau de Parfum Caresse, the two perfumers invented a new love potion as sensual as it is delicate: a tender heart of fresh, textured Rose essence caressed by white Musks and intertwined with a creamy Tonka Bean accord. A scent with smooth, delicious aromas, subtly highlighted within the diamond bottle of Trésor La Nuit, whose neck is adorned with a just-blossomed rose.
A new film reinvents the Trésor legend

In 2015, Lancôme unveiled a new facet of Trésor with La Nuit Trésor Eau de Parfum, a captivating and hypnotic variation of the rose, the flower that inspired the original fragrance, preciously encased in a black diamond bottle. For the second olfactory chapter of this reinvented saga, Trésor La Nuit Eau de Parfum Caresse, Lancôme, grand perfumer since 1935, chose the English director Johnny Green to tell the story of an ultra-contemporary facet of the romantic legend of Trésor. In this original film, model Noah Mills stars alongside the Trésor heroine since 2010: actress and Lancôme ambassadress Penélope Cruz. 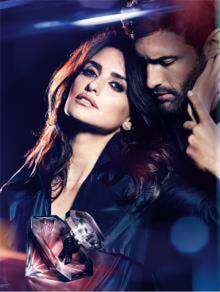 iving each day as if it were the first
Paris. An enamoured couple exchanges loving gestures, intimately sharing happiness that nothing can defeat. In the dead of night, the woman silently sneaks out of their large flat. She drives towards some unknown destination, a glow of anticipation in her eyes. A motorcycle races past her and a game begins. Do they know each other or is this by chance? The engines vroom and the tyres squeal. They goad each other on in a car chase towards a mysterious horizon. What are they doing? Where are they going?
When she enters the lobby of a luxury hotel, the concierge slips a key into her hands. It was all planned in advance. A lift rises and the tension of desire becomes tangible. She walks down a hallway, her key to unlock the door. A man is waiting for her. Arms embrace and bodies reunite. It is the same man she left in the bedroom of the spacious flat. He is the one who followed her through the sleepy Parisian streets. He is the man she loves and who loves her. It is a delicious lover’s game. A way to leave each other only to experience the joy of meeting again, as if for the first time, with the same emotion and desire. Every day and forevermore.
In a stroboscopic succession of shadows and flashes of light, Johnny Green builds up the tension with breath-taking suspense, underlined, after a few notes of Trésor’s original anthem, by the sensually bewitching track from the Australian group Movement, “Ivory”, whose lyrics were specially rewritten for the film. Green’s camera reveals the sublime Penélope Cruz, the perfect incarnation of a modern woman in love. In control of her destiny, she is moved by the desire to make every day of love like the first, in a perfectly equal relationship that offers the freedom of being oneself, while being part of a whole: 1+1=3, the new equation of a couple, a story captured through the lense of the photographer Nico Bustos.

Penélope Cruz, the incarnation of confident and modern femininity
From her first impetuous steps in front of Bigas Luna’s camera in 1992, with each and every film and role that the Spanish actress has taken on, she has continuously proven that a career is not simply based on talent or luck. Being an actress is about being chosen, but also about making choices. Not waiting for an outstretched hand, but inciting desire and never resting on one’s laurels, whether they take the form of an Oscar, of a Best Actress award at the Cannes Film Festival or of a Goya for Best Actress. Drama, comedy, suspense, action, fantasy/thriller, westerns… As curious and perfectionist in Europe as she is in Hollywood, Penélope Cruz has continuously challenged herself with new emotions and universes, refusing to make the same choices over and over again and even co-produced one her last movie Mama. From Pirates of the Caribbean to Vicky Cristina Barcelona, from Broken Embraces to Nine or Volver and so many other masterpieces, in the eyes of the world, Pedro Almodovar’s muse represents femininity that is strong yet sensitive, passionate yet intelligent, sublime yet accessible.

The keys to mysterious beauty
Penélope Cruz’s make-up for the La Nuit Trésor film was done by Pablo Iglesias, her long-time personal make-up artist both for her films and her collaboration with Lancôme. To perfectly yet subtly enhance her complexion, he used the make-up base La Base Pro Hydra Glow, Teint Idole shade 03, Poudre Majeur Excellence shade 01, Belle de Teint shade 04 and Blush Subtil shade 011.
Her eyes are shrouded in mystery with Hypnôse Palette D02 and intensified by Crayon Khôl Noir, Grandiôse Liner Noir, Grandiôse Noir mascara and Sourcils Styler Brown.

On her lips, a touch of L’Absolu Rouge Poème Mat is set off with Juicy Shaker shade 142.

In her neck, the smelling of La Nuit trésor.